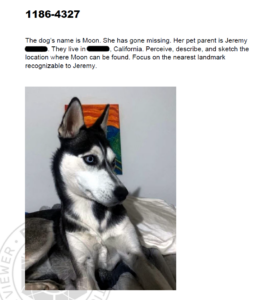 This was a very special event. Most projects require some time of preparation. The request comes in, the project manager takes care of effective tasking, assembles the remote viewer and monitor team, the sessions are submitted, and the analysis team can evaluate the data.

Sometimes, however, the road is much bumpier and innovative work needs to be done. And in this case, everything was different than usual. Two other remote viewers were externally involved in the project, I later learned of their participation, and what a surprise, one viewer is already a PSI Core Viewer and the the second remote viewer was Charlie Peralta and he may well become so at his potential someday. With a team of a dozen remote viewers, I am very busy and rarely get the chance to be operationally available as a remote viewer in projects, as I usually take over the project management.

„Are you interested in an operational tasking with a little urgency. Up to stage 3 or 4 as you wish.
Possible retasking and feedback at the end. Pro-bono.“

I had almost forgotten what an honor it is to be asked to be a remote viewer on projects like this. I prepared everything for a Controlled Remote Viewing session and took the tasking number given to me.

Let’s take a look at the data we came up with during the sessions. The  target was land and a structure. I sensed in general an open, flat and hilly area. Viewer #003 and Charly Peralta also sensed a hilly landscape.

Visual impressions of the environment in the rough are often reflected in the subconscious first in my ideogram and later in more detail at the beginning of stage 3. This is due to the fact that I am in the target area by the angle of entry. From the general to the specific.

A large metallic, round and white structure seems to be an important aspect in relation to the task. In fact, right next to the building where “Jupiter-Moon” was found locked in a blue van, there is a water tank.

There were further visual impressions in Stage 3 that formed out of the landscape, that later evolved.

The closer we get to the actual target, the clearer the visual representations become. The subareas within the fenced area become more and more detailed. In particular, recognizing the power poles helped Jeremy in his search.

Viewer #003 perceived one person at the target area in connection with the disappearance of Jupiter Moon along with the phrase, “lost or missing item“ and “… an obliging attitude from someone present at the target.”

And finally visual impressions of the cage in which “Jupiter Moon” was held. In the picture and also based on Jeremy’s statements, there were two cages side by side in the van.

Remote Viewer #003 also picked up on the passion of the dog owner, Jeremy’s paintings. It describes very well the inner world full of worries and fears of the owner of “Jupiter Moon”. 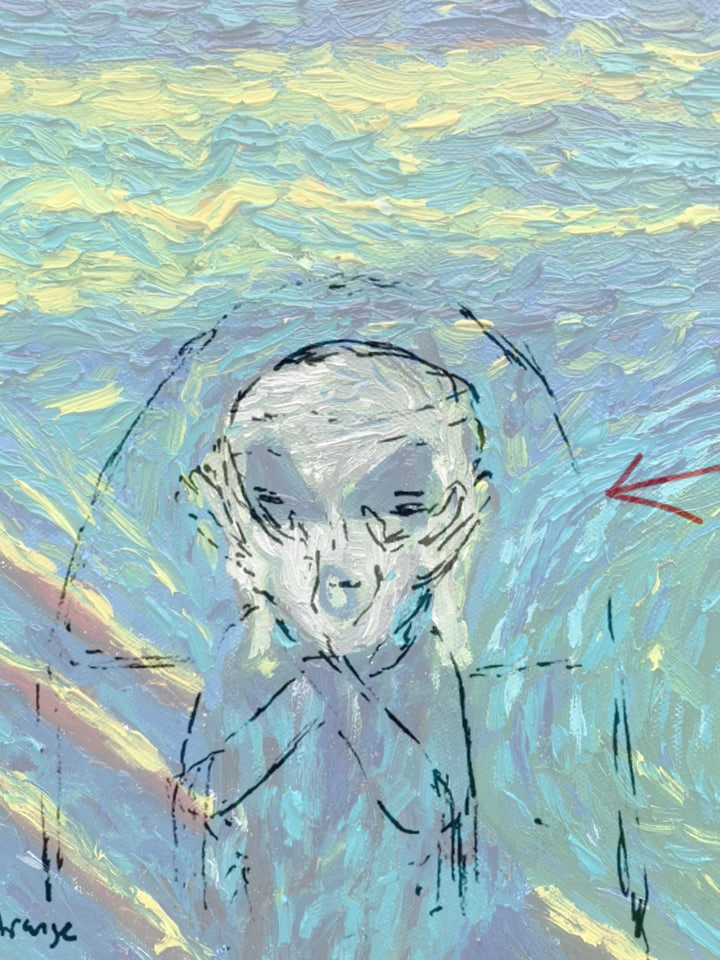 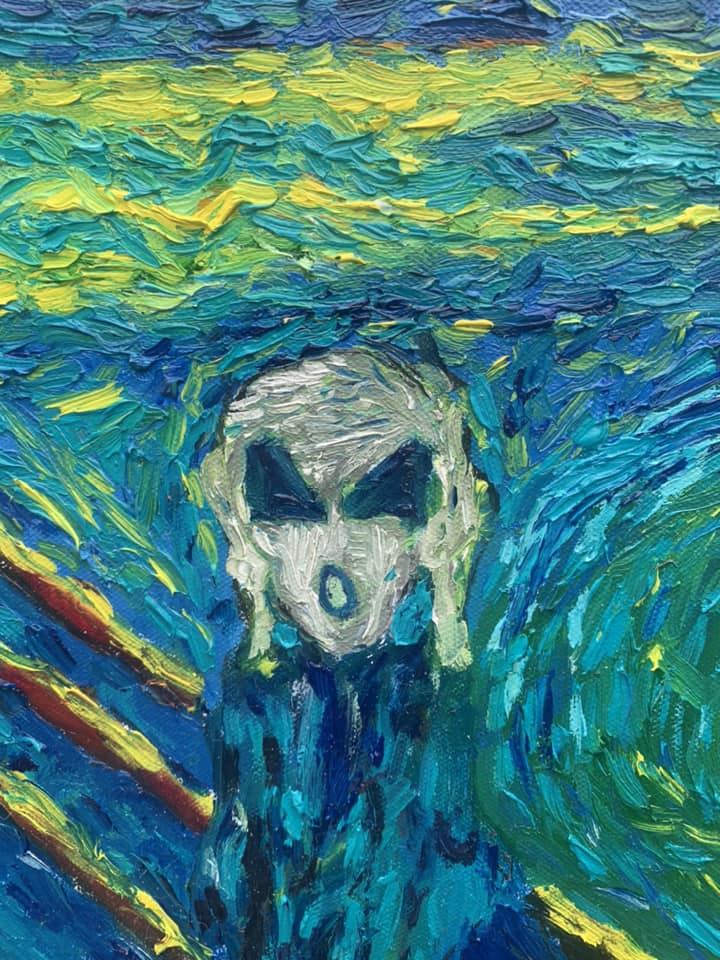 An ERV session conducted by me directly afterwards brought more detailed data. I developed this year a form of CRV/ERV approach which turned out to be very successful for operational remote viewing work.

The principle is simple, CRV to Stage 4 or 6 and then directly into an ERV session with the support of specific hemisynch sounds. Objectification of all data sets first by speech via voice recorder, then transfer of the perceived data sets into a S4/S6 matrix including sketches. In one of our next articles we will go into this in more detail.

Let’s see how this approach helped in this case.

The transition appears almost seamless from CRV to ERV, no cool-down is required.

I felt it was dark and dry in the immediate area. I perceived a form of hand. As if a body is dehydrated. I felt tension, squeaking noises. A slippery surface, as if a finger was sliding over metal. I tried to connect more with the target and asked the question “Where are you?”.

It felt like a person was thinking or shouting out loud “Where are you?”. I tried to take an optimal position to the target and perceived a uncomfortable feeling. Round lights and black points in front of my eyes.

I asked [Show me what happend here?]
I felt a direct a kind of pain in my hip area and back. I perceived a kind of voice like “Calling my boss”. I sensed dry lips, it was windy, more pain in the chest area and lower ribs. It was an uncomfortable, scaring and nervous feeling what i perceived from a life form at the target area. Nearly like problems to breath.

[Show me the envoirment where the person is now]
I perceived a kind of street nearby, Bushy, flat and hilly envoirment. Like a long street in a lonly area. Like yellow median, two lanes, like a country road. A kind of powerpole next to it for energy transport.I sensed brownish, yellowish, and greenish colors in a bushy area. … (off signal) … Furthermore reddish shiny impressions. It reminds me on a kind of traffic light.

[Optimum position birds eye view]
Mountains, rocky and watery … (off signal) …
Note: In fact, a few hundred meters from the target area there is also a small canal.

I asked myself again [show me the location, show me the most significant impression at the location to solve the task]
Structure, high structure, criss crossed, it is merging to a kind of sword and then i felt hurt on my body.

[Where we can find her?] Note, here I realized that it is a girl.
Releasing gas, releasing gas, like location is near something where gas is released, it reminds me on a gas station. Like in the middle red on the top of the roof, in the middle red, then white elongated. Not often visited. Then … (off signal) …

End of ERV session and take sketches and transfer from voice record to paper.

„Good. You got the data we needed. „Where can we find her.“ was spot on! Here is the feedback. I have two others working on this too. There is corresponding data already. „

„The dogs name is Moon. Jeremy is my friend. He loves the dog and is having a hard time.“

„I REALLY appreciate your help. I am going to go over some things with Jeremy. He just found a neighbor who saw the dog so now he knows which way she went. You had a corresponding landmark to another session too.“

„SPOT ON AGAIN! Jeremy said there is a gas station that looks exactly like that. He talked to the owner yesterday and he DID see the dog go throu there. Good job.“

„Now that you know it is a missing dog, if you feel like it, perhaps just a sketch page of exactly where the dog id now. He is going out down the road you sketched as we speak. A sketch with descriptors might help.“

Ok, that was a request and a special task. My team and others who work with me know that I’m not a fan of viewing a target area when I already have information about the content or the task itself in advance. In general, we already work with information that we have compiled in the first sessions when we are set on the target again, but it still has a different quality when you are told exactly what it is all about. The probability of being full of prejudices and forming chains of associations is very high. Normally, the signal-to-noise ratio of about 85% signal | 15% noise usually changes to 85% noise | 15% signal.

But hey, every opportunity should be taken to help in such cases, so I set out on my final session on this case. Moon had already been missing for five days, so I replied: “Ok, give me 30 minutes and i will check what i can do.”

In retrospect, I was very surprised that the frontloaded session had such an enormously dense truth content.

Interestingly, Jeremy had also dreamed of this bridge the night and I created a similar sketch. Jeremy followed the path and in the back on the right (red dot) is the building where Jupiter Moon was found.

The cage in the car.

Jupiter Moon was found in a blue van in front of these buildings. The drawings turned out to be mostly correct, even with prior knowledge of what the target was about. If we take it exactly it is a kind of neutral frontloading, because I knew now that I was looking for a dog, but still the whereabouts were unsolved.

Another key moment from Jeremy in his search for the right path and direction. This sighting helped him to orientate himself.

Bird eye Impressions. One of my few strengths.

The hope was high that Moon would be found with the help of our Remote Viewing sessions and so it happened. I got the news the next day. “He found her. The video is next.”
And I think all involved were deeply touched and close to tears when we watched the video. 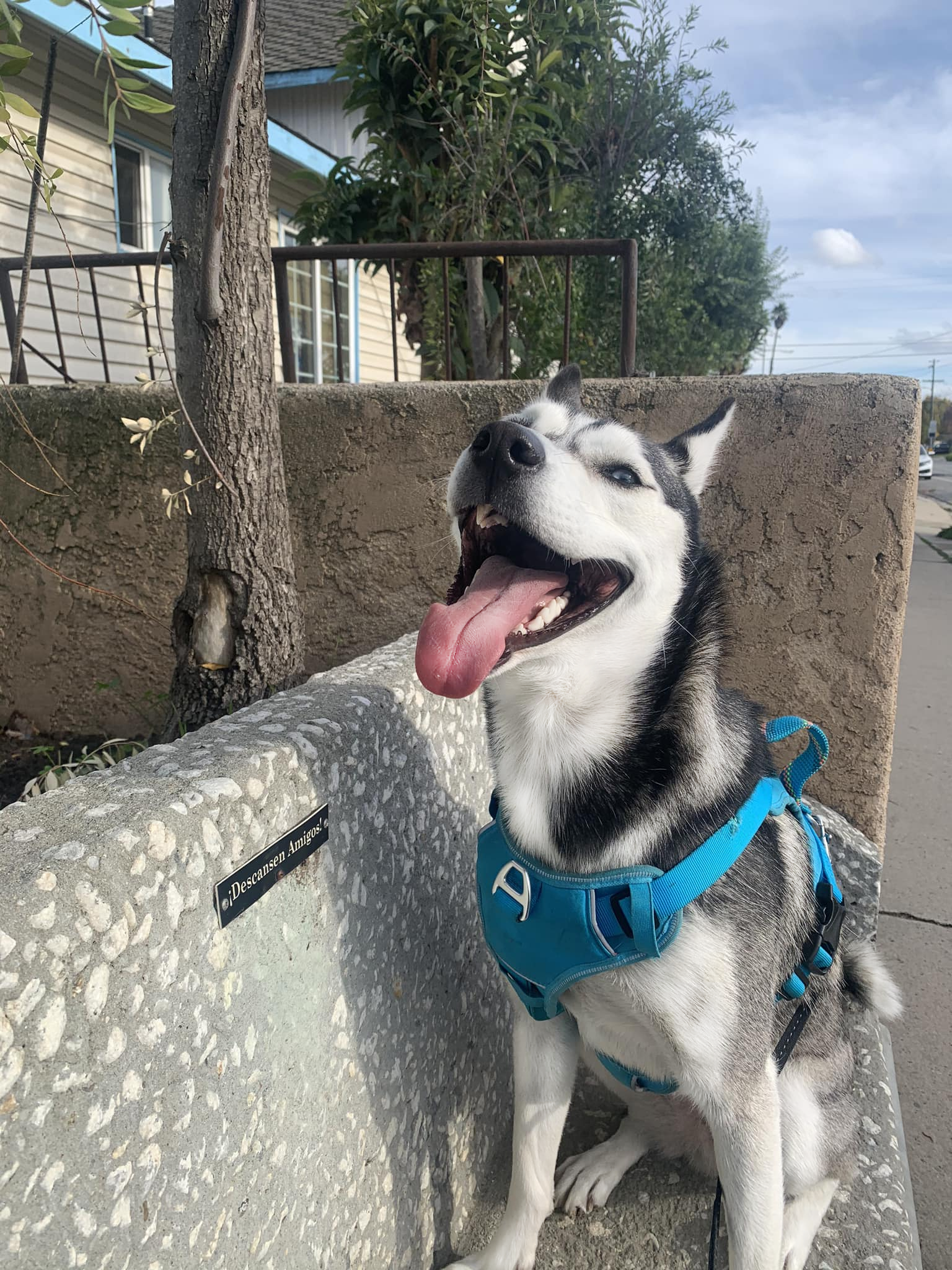 “Brilliant analysis. Thank you again so much. She is the center of my world. This has sparked a great deal of interest in Remote viewing for me, it’s preternatural ability to be used as a tool to help others in dire situations pulls the blinds open on the eyes to what consciousness truly is once one step closer to the center of that cosmic mystery and looks through its window through our minds eye. It’s beyond spoon bending, it’s mind bending.”

These are the great moments in Remote Viewing. Realizing the meaning, using the possibilities that our human innate abilities bring us to such achievements with Remote Viewing, but above all what all good can be done with it. In the spirit of Christmas, this was a premier highlight for me this year. We also wish you reflective days and come well united in the new year. Thanks to all involved and to Jeremy for permission to publish here.